Has it almost been two months

I did not realize that it has been two months since the last posting, but that is what happens when you have life.  Between baseball, school, Rock (church youth program), potty training, swim team, swim lessons, dive lessons, and baseball that was unexpected. Then you add starting a women's ministry at the church, planning on how not to go crazy this summer and keep the kids from saying the dreaded "b" word, especially when it reaches 120 out and I don't want them being electronically entertained. I feel like there is no way we could be three days from June!

Well, I now have a second grader!!!!  He finished first grade and did so well.  I am so excited to see how much he has learned this year, as I sit with him over the summer and really reflect with him.  I don't like to do much "school" type stuff after school because he has just spent the last 8 hours doing that and needs time to play and be a kid.  So that is what he does.  Plus Cody needs his big brother!


On May 11th we did the Neon Splash Dash as a family!  This is the same night run that Zane and I did in Oct.  but this time ALL did it!!!!  It was so much fun but I sure had three tired boys after.  See David and Zane got back from the school's camp out (Thurs, Fri and Sat.) on Sat. afternoon.  They were home 2.5 hours before we took off for the race and were up there for 4 or more hours.  So much fun though! The pictures are in no particular order! 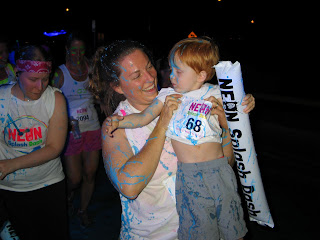 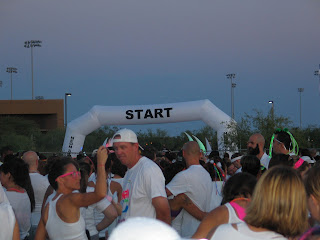 We have also been very busy with baseball.  Zane ended his season back on the 7th.  But we got a message from his coach that the league wanted us to play in a Tournament of Champions on May 18th.  We were out matched because our kids were coach pitch and 6 and 7 playing in a tournament with a pitching machine (new this fact) against a team that was what we call the Farm League (a mix of Kid pitch and coach pitch) who were 8 and 9 year olds.  WOW these boys do have a major growth spurt between now and 9! But all things considered they did great!  We were also blessed that the president of our league was there to see our team play.  He realized that the letter our coach wrote to them was not an exaggeration and invited our WHOLE team to play in the all-star game!  So we now have two more games!  We added two players from another team.  We had another little surprise yesterday.  We arrive at practice when one of the other coaches comes running (literally) to our coach asking for 3 players.  Well, good thing we arrive early!  Because Zane was one of the ones that were asked.  This was great because I got a chance to understand what Farm League is better and see how Zane stacks up to these kids.  It looks like we will be doing Farm next spring.  The coach for the team Zane played for said he would be ready for Minors, think that is a little too much too fast.  But realized that another year of coach pitch would not benefit him either.  I will try and get a post that shows the pictures of baseball.  We have some good ones!
Posted by zanesmommy at 4:57 PM

zanesmommy
I am a God fearing, Jesus Freak who loves her husband. I treasure my boys and cherish the time God has given me with them. I miss my middle son who is in Heaven. I enjoy to read, scrap book, and cross stitch in my spare time. I am a SAHM who takes her sons on adventures and forgets to do(I mean skips) the housework, but figures that in 20 years no one will care.

Check out our favorite places

I Took His Hand and Followed

My dishes went unwashed today,
I didn't make the bed,
I took his hand and followed
Where his eager footsteps led.
Oh yes, we went adventuring,
My little son and I...
Exploring all the great outdoors
Beneath the summer sky
We waded in a crystal stream,
We wandered through a wood...
My kitchen wasn't swept today
But life was gay and good.
We found a cool, sun-dappled glade
And now my small son knows
How Mother Bunny hides her nest,
Where jack-in-the-pulpit grows.
We watched a robin feed her young,
We climbed a sunlit hill...
Saw cloud-sheep scamper through the sky,
We plucked a daffodil.
That my house was neglected,
That I didn't brush the stairs,
In twenty years, no one on earth
Will know, or even care.
But that I've helped my little boy
To noble manhood grow,
In twenty years, the whole wide world
May look and see and know.


Go ahead and mention my child,
The one that died, you know.
Don't worry about hurting me further.
The depth of my pain doesn't show.
Don't worry about making me cry.
I'm already crying inside.
Help me to heal by releasing
the tears that I try to hide.
I'm hurt when you just keep silent,
Pretending he didn't exist.
I'd rather you mention my child,
Knowing that he has been missed.
You asked me how I was doing.
I say "pretty good" or "fine".
But healing is something ongoing
I feel it will take a lifetime.
~ Elizabeth Dent ~